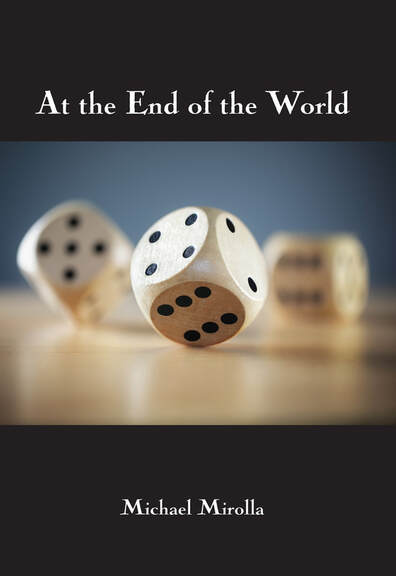 A good poem keeps its promise to the world, collects the details of transient reality, and reveals them reborn and remade with the prestidigitation of language. Michael Mirolla’s At the End of the World works magic with his haunting voice, his linguistic sleight of hand, and his ability to transform experience into the marvellous. Here is magic and mystery in the hands of a master.
--Bruce Meyer

The high-performance pieces in At the End of the World steer a reader off-road – into the cave, the bog, the pool; the “electric marketplace,” “dyslexic day,” the “gunslinger afternoon.” Into the “terror called language.” Michael Mirolla’s poems are philosophical yet conversational; tough, wise, witty and gripping. Ironically romantic. Plato, Zeno, Updike and Pound, Cohen, Woolf, Rilke and Kafka can watch, from the vault, Mirolla glow in his own “added shadows.” I’m blown away and beckoned back – surprised each read by his “magic use of words,” if not fully “safe from both light and darkness.”
--Elana Wolff

Michael Mirolla is a daring and imaginative writer who takes us on journeys to places we haven’t been. “A place with neither inside / nor out. A place that can’t be imagined. / Imagine then what can’t be imagined.” In his new collection At the End of the World he employs inventive language, erudite allusions and extraordinary metaphors creating poems as surreal caverns filled with tragedy, beauty and courage of the world. This book reveals Michael Mirolla at the summit of his poetic power.
—Laurence Hutchman 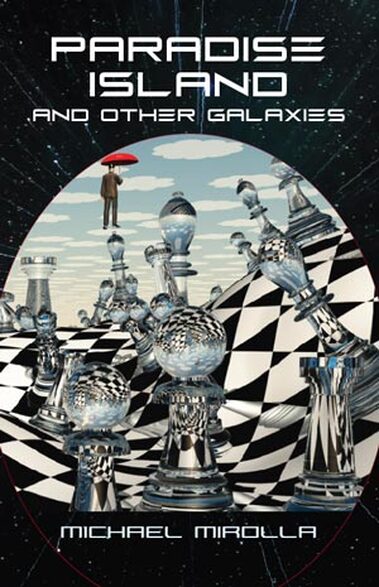 EMAIL MIROLLAMICHAEL@GMAIL.COM TO PURCHASE A SIGNED COPY
​Vivid language powers the highly inventive narrative of Michael Mirolla’s new collection as he navigates vast science and speculative fiction territories. These are bold voyages, to limitless expanses that defy convention – travels beyond the boundaries of the familiar, to cosmic atolls where the reader will take in the wonders of imagination let loose.
​“In Paradise Islands and Other Galaxies Michael Mirolla’s forays into the multiverse of imaginative fiction are both cerebral and playful, replete with painterly imagery and whimsically creepy irony.” —Claude Lalumière, author of Venera Dreams: A Weird Entertainment.
Watch Michael Mirolla's virtual book launch here. 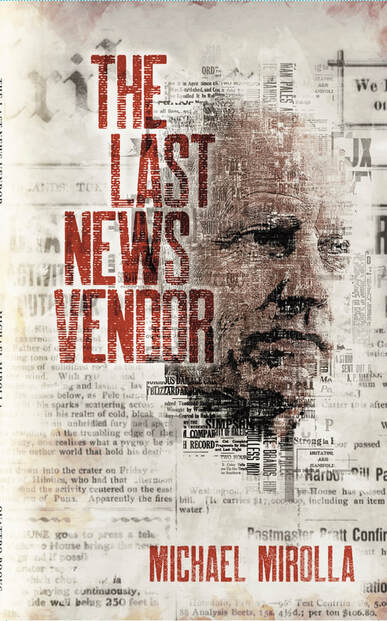 EMAIL MIROLLAMICHAEL@GMAIL.COM TO PURCHASE A SIGNED COPY
The Last News Vendor follows an existentialist narrator who devises a plan to fade out of his own life in a subversive and comically absurd attempt at self preservation, leaving his partner and two children with no memory of him. Comparable to Franz Kafka’s The Metamorphosis as an allegory of transformation, reality and the absurdity of human existence; Michael Mirolla's newest novella is a dreamlike meditation on broken spirituality, a collapsing society and the overburdened contemporary soul.

Superb. The characters are as notable and outrageous as the storyline ... The Last News Vendor by Michael Mirolla is an                  unconventional, though strangely appealing journey into another dimension, and  I recommend it to those who prefer a bit              of the extraordinary in their reading adventures.

— Sheri Hoyte, Reader Views, read the full review here
​
​​
This is a rare book of a kind that Canadians don’t often write. It is a pleasure to read something that is this original and this well done. You should pick it up if you can. ​

Michael Mirolla's new work is a wild ride, quick--sharp ... a strong vision of strange things happening to people, on streets: it's one part Kafka, one part pure Mirolla, lively, witty, vivid, and in the end troubling and hallucinatory. It's about time people paid more attention to Michael's original voice and vision. No one quite makes such wildness seem part of our everyday. His voice is swift and sure ... and I read his book in one entranced sitting, finding its immediacy wholly absorbing. How he combines hallucination with lucidity is a wonder, part of his mad-sane alchemy.

— B.W. Powe, author of The Charge in the Global Membrane and Where Seas and Fables Meet

One wonders in reading Michael Mirolla’s The Last News Vendor whether he isn’t inspired by the Japanese painter Hirosige of the ukiyo-e tradition.  Mirolla uses concrete props - porn and printers ink, grease and tattoos, vinyl and vice - as gateways to the coded revelations of the inner city night. Reading The Last News Vendor was like stumbling across an illicit act in flagrante delicto, and finding yourself unable to pull away. He describes a universe that is tactile rather than virtual,and which had me recalling two other tales of things disappearing, never to return - John Fowles “The Collector” and Doris Lessing’s “Briefing for a Descent into Hell”.

— David MacKinnon, author of A Voluntary Crucifixion and Leper Tango

The truth about the truth is that it gets into everything, but Michael Mirolla does not let the mulling interfere with the buzzing, with all that we have forgotten. As for what’s not in this book, well that’s his too, he’s just lucky that way. 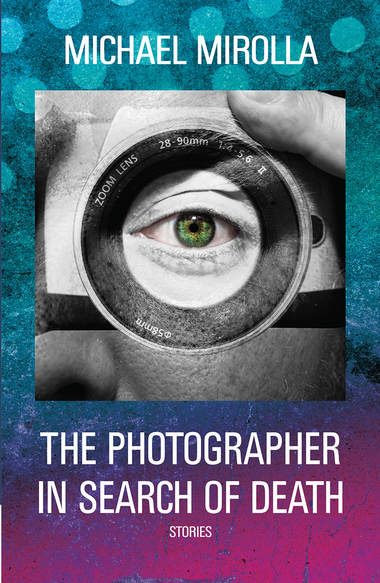 EMAIL MIROLLAMICHAEL@GMAIL.COM TO PURCHASE A SIGNED COPY
Michael Mirolla in The Photographer in Search of Death tells us stories that blend the explicable with the inexplicable. As if a camel were actually passing through the eye of a needle, these stories pass what is commonplace through a hyper-realistic lens into the utterly mysterious. Houses have rooms that appear and disappear. Very real objects, invaded by an unbelievable force, become believably unreal. Streets filled with everyday individuals become— in our modern technological environment— ultra ordinary. What we wish to avoid becomes unavoidable. This is a world beyond the merely "magical"— this is a binary world of becoming.

"The stories, which were written over almost fifty years, are a tribute to the rich continuity in the author's writing. Michael Mirolla is an exceptionally talented writer, and many aspiring writers could learn much from his ability to fuse the magical with the real."

"Enhanced by the backdrop of 1970s discord and political violence from the Front de Libération du Quebec (FLQ) in Quebec, a strong sense of unease and manipulation permeate the novel. Mirolla leads readers into questions about what makes someone evil, the nature of right and wrong, and how people can be influenced by others... Mirolla's vivid writing and the psychological intrigue will pull readers through to the last page."

"Mirolla writes with great passion, and his novel will appeal to anyone possessed of a nostalgic interest in this tumultuous period in Canada’s history."

"Torp successfully creates a feeling of mild paranoia, a kind of tense energy... [it] showcases the politics of personal lives amidst the politics of national significance."

"With Torp, Michael Mirolla once again demonstrates that he can be considered one of the finest prose writers in this country. This is a love story that reads like a mystery novel set in Vancouver in 1970. A fable, almost a swan song of the flower-power days."
​
— Antonio D’Alfonso, writer and filmmaker
Check out Michael Mirolla's interviews with Open Book Toronto, The Mississauga News, Inside Halton & The Barrie Examiner
Listen here to Michael Mirolla's interview with Pearl Pirie on CKCU fm's Literary Landscape
Proudly powered by Weebly